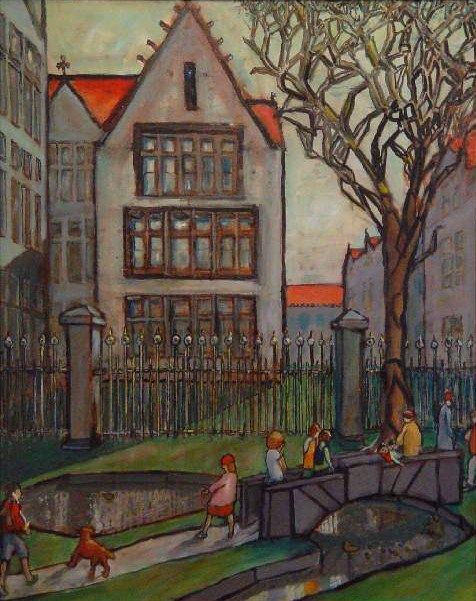 A Love Affair With Colors

A Love Affair With Colors is the theme of the exhibit.  I use color as a driving force to create art that is recognizable to the viewer, yet abstracted from a literal representation.  My art explores the interplay between abstraction and realism across genres such as figurative art, still life and cityscape paintings.  For example, my painting of Botany Pond, on the University of Chicago campus, presents a Chicago scene in a way that is representational without being photorealistic. The exhibit will include both oil paintings and photographs. 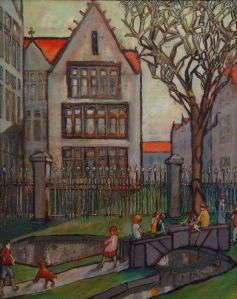 My photographs, in the form of digital art, explore the interplay of representational photography with digital transformations that present a more abstract view.  Two series are included:

Digital Gothic:  Scenes from the University of Chicago campus, featuring details from its Gothic Revival architecture.  These artworks were also featured in the “Art Takes Times Square” exhibit.  Blue Flowers At Botany Pond was selected by the editorial committee for an art book, Art Takes Times Square 2012. 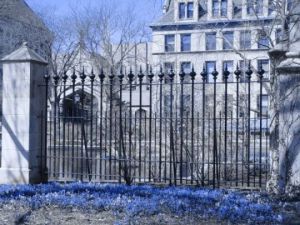 Chicago, City of Bridges.  Many bridges were built along the Calumet River since its development in the 1860s. The Calumet harbor continues to be this region’s busiest port. The Chicago Skyway Bridge was built to be a shortcut from State Street in Chicago to the steel mills on the Southeast border with Indiana. I see the notion of transformation as being true of this region on a symbolic level as well being my artistic media. The vibrant colors in my photos represent the vital role this industrial hub played in developing the Calumet region, for example, Infrastructure Madness. 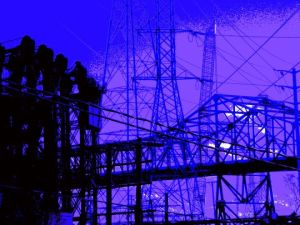 The reception is honored to have nationally recognized flutist, John Sarantos, performing.  One of the World’s pre-eminent Native American flute instructors, John Sarantos has facilitated Native American flute workshops from coast-to-coast for over 15 years. He was the first to receive the prestigious Naja Award from R. Carlos Nakai for his work in promoting the Renaissance of the Native American Flute. John has performed live in venues large and small; including New York City’s Carnegie Hall. (P.S. He’s also my brother, thanks for offering to entertain us John!)

The exhibit is on display from October 6 to November 16th at  CornerStone Art Center and Gallery, which is located in the Centier Bank Building, 1500 119th Street, Whiting, Indiana, 46394.  The reception is on Friday, October 12, 6 to 9 PM.  Cornerstone Art Center & Gallery is located 30 minutes outside of Chicago in NW Indiana in the Historic Downtown District of Whiting, Indiana.  The center is organized by the 119th Street Artists, a non-profit group that seeks to bring an appreciation of the fine arts to people in all walks of life and to provide support and encouragement to Midwestern artists.

Fairy Tales is in the side gallery at CornerStone.  The Fairy Tales exhibit will feature ink on paper – positive and negative space.  An award winning artist from Indiana who has shown locally, B.S Farris holds a Bachelor of Art Degree and a minor in Art History from Indiana University and holds a Master of Art Degree from Governors State University. She is the gallery coordinator and a board member at CornerStone Gallery.

Opening at Studio 659: Monsters And Graveyards

With the help of our friends in Arts Alive!, we have arranged to have artwork featured in the storefronts of local businesses along the way between these two locations. This will include a gallery exhibit at Full Circle Art & Framing, curated by owner and artist, Kathy Winsberg
Full Circle Art is at 1405 – 119th St., Whiting, Indiana.

Leon Sarantos originally grew up in the Midwest and currently lives in the Hyde Park neighborhood of Chicago, Illinois. He obtained a Bachelor of Architecture degree in the College of Arts and Architecture at the University of Michigan. After moving to Chicago, Leon continued his work in architecture and art, and studied in at the Art Institute of Chicago and Hyde Park Art Center. Mr.Sarantos has exhibited his work extensively in curated art shows on a national and international basis.  His website is:

My digital art cityscapes are also in two other exhibits this month:

About Studio 659.  Studio 659 is an Art Studio in the heart of the historic downtown district of Whiting, Indiana. Located only 20 minutes from Chicago on the shores of Lake Michigan, Studio 659 is not only an art gallery but a studio which offers classes to youth and adults as well as puts on live music events, book signings and more.The Studio is headed by the Whiting Arts Council which was a brainchild of Mayor Joe Stahura.  The Council is made up of representatives from all of Whiting’s artistic organizations including: Whiting Lakefront Symphony, Marian Theatre Guild, Arts Alive!, 119th St. Artists, Calumet College, Whiting High School’s Art Department as well as at-large members of the community who have art backgrounds.